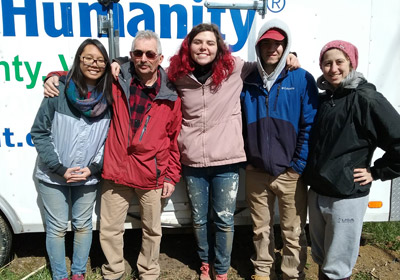 Desiring an alternative way to spend their spring break—in lieu of the traditional beach scene—10 students opted for working with Habitat for Humanity in West Melbourne, Fla.

A group of Bridgewater College students and a faculty member will put on tool belts and pick up hammers as they spend spring break volunteering as construction workers with Habitat for Humanity’s Collegiate Challenge Spring Break 2019.

Desiring an alternative way to spend their spring break—in lieu of the traditional beach scene—10 students opted for working with Habitat for Humanity in West Melbourne, Fla.

The students, accompanied by Dr. Jason Ybarra, assistant professor of physics at Bridgewater College, will leave for Florida on Sunday, March 3, and return to campus on Saturday, March 9.

For the 2019 Spring Break Challenge, the group will work in partnership with the Brevard County Habitat for Humanity affiliate.

Jenna M. Walmer, a senior global studies major, from Mount Joy, Pa., is serving as the student leader for the group.

Walmer is making her third Habitat trip. She has participated in Spring Break Collegiate Challenges in Atlanta and Abingdon, Va.

“My favorite part of Habitat for Humanity trips is serving communities in need and meeting future homeowners,” said Walmer. “It’s really a joy to work alongside of them.”

Walmer also enjoys the diverse group of people the trip brings together. “I’ve met so many people since we work, cook, live and adventure together,” Walmer said. “It’s a great new group of friends.”

In addition to Walmer, Bridgewater College students making the trip are:

The BC Campus Chapter, established in 1995, is one of nearly 700 campus chapters worldwide. Organized by Bridgewater students, the group is affiliated with Central Valley Habitat for Humanity in Bridgewater, and helps provide shelter to the residents of Harrisonburg and Rockingham County.

This is the 22nd year that Bridgewater College students have used spring break to work on various Habitat projects, including three trips to Miami and one each to Atlanta, New Orleans, Philadelphia, Independence, Mo., and Austin, Texas.

Now in its 43nd year, Habitat for Humanity International is a nonprofit, ecumenical Christian organization dedicated to eliminating substandard housing worldwide. The organization works in partnership with people in need throughout the world, building simple, decent shelter that is sold to them at no profit and financed with affordable loans.