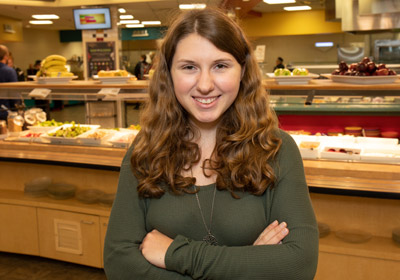 The Showker Prize competition encourages students to work together to create employable solutions for real-world problems.

When the group of first-year Flory Honors students met in fall 2017 to discuss their ideas for the Showker Prize, which challenges students to devise a solution that can change the world, one idea kept floating to the top. Sabrina Volponi ’20 and four of her Bridgewater College classmates discussed how they all knew someone who was affected by a mental health disorder. Not only that, the recent high school graduates talked about how mental health issues can become more prevalent in a college setting and that a stigma around seeking help exists.

As Volponi researched the topic, she turned to YouTube for videos on basic mental health information. The ones she found were either 30 minutes or two minutes in length, and she realized the need for in-depth yet to-the-point videos that not only discussed the topic but also featured resources.

Thus, the group’s video project, “The Stigma Ends Now,” was borne. They sent out a request for students who would be open to
sharing their struggles with mental health, so that others wouldn’t feel alone. Collaboration was key for the group, in which
each student contributed to research, script writing, interviewing and editing of videos during their downtime from classes. They had to negotiate language choices in scripts, as well as learn new programs to create their end product. That product — three videos on depression, suicidal thoughts and anxiety—earned the students the coveted title of the first Showker Prize winners, which comes with a $5,000 award, in spring 2017.

After working together their first year at Bridgewater, most of the members of Volponi’s group came together again as sophomores to make another run for the Showker Prize. Volponi says working together for the second year was more seamless, as each group member knew where his or her strengths lay, whether it was in building a website or drafting a petition. This time, the project topic was more in line with environmental science and math double major Volponi’s field of interest: food waste management. Volponi served as group leader and gathered all the educational materials needed for the project, which consisted of creating an interactive lesson plan for teachers about the effects of food waste, speaking to area groups to educate them about the issue and hanging posters around campus to inform their fellow students. Volponi measures success not only by winning the Showker Prize for the second straight year, but also in seeing the effects of the project in real time. After presenting their lesson to a group of students, one person was so convinced by what he saw he said he planned to start his own composting pile.

The Showker Prize shows students they can not only change the world at large, but also have a huge impact on the world around them. “It was hard at first, because you think to yourself, ‘I’m only one student, what can I really do to change anything?’” Volponi said. “But once you commit yourself and get started, you realize there are things I can do. I can do little things, which add up to bigger things, which lead to bigger things, which create change.”