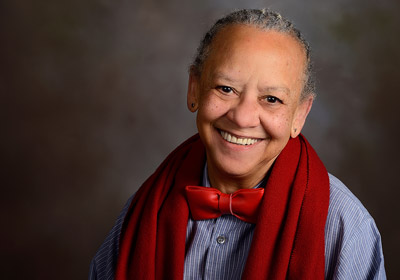 One of the most widely read American poets, Giovanni is proud of being “a Black American, a daughter, a mother and a professor of English.”

A strong voice in the Black community, she is determined and committed to the fight for civil rights and equality.

Born in Knoxville, Tenn., Giovanni grew up in Lincoln Heights, an all-black suburb of Cincinnati. She graduated with honors from Fisk University and attended the University of Pennsylvania and Columbia University.

The author of more than 30 books, Giovanni has received numerous honors and awards. Her autobiography, Gemini, was a finalist for the National Book Award. Love Poems, Blues: For all the Changes and Quilting the Black-Eyed Pea were all honored with NAACP (National Association for the Advancement of Colored People) Image Awards.

Giovanni’s spoken word album, Truth is on its Way, was a top 100 album and received the Best Spoken Word Album presented by the National Association of Radio and Television Announcers. Her Nikki Giovanni Poetry Collection was one of five finalists for a Grammy Award.

Giovanni has been named Woman of the Year by Mademoiselle, Ladies Home Journal and Ebony magazines. She was the first recipient of the Rosa L. Parks Woman of Courage Award and she received the Langston Hughes Medal for poetry.

A University Distinguished Professor at Virginia Tech, Giovanni is the recipient of the university’s highest honor, the Alumni Outreach Award.

Sponsored by the W. Harold Row Symposium on Reconciliation, the event is open to the public at no charge.